Bring your instrument(s) and/or voice and come join a fun, friendly musical scene for all ages.

Come along for a wonderful concert by folk duo Gill and Kate, known as Wandrella.
Wandrella play a mix of clever "covers with a twist‟ and original songs which reflect their classical roots and eclectic musical influences.
Kate has played solo Celtic and classical guitar and has opened for the Arizona Smoke Review in the UK and Paul Obana Jones in NZ. She was influenced by the finger picking styles of Stefan Grossman and Gordon Giltrap. She also plays in the duo "String Fusion‟ with Bill Nicholson, recording an album in 2015.
Gill recorded her first album “Colour Outside the Lines” in 2004. She has played and recorded several songs with local musician Kevin Watson and in 2016 teamed up with local musician Simon Burgess 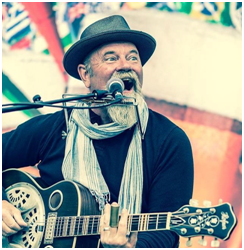 A versatile and talented internationally touring Blues & Roots singer-songwriter from the UK, now based in New Zealand.
Mike 'Dr Blue', brings you old classics, original songs, guitar, harmonica and a 'swinging bluesy pulse to accompany his raw edged vocals' - Adelaide Advertiser.
Expect to sing along, tap your feet, and maybe even dance in the aisles as you enjoy an evening of 'Authentic Blues... mesmerising' - *****Broadway Baby.

Sample the songs at www.mikedrblue.bandcamp.com, and then come and enjoy him live.
If it ain't the truth, it ain't the Blues.

Here is a link to his video of Silent Man:  https://www.youtube.com/watch?v=grZs_0ko0yo

Membership fees:
Single: $20 for the year (1st April to 31st March) or $10 for half a year (September - March).
Family membership: $30 (full year) or $15 (half year).
Being a member makes entry to club nights and concerts cheaper – you’ll soon make your money back on the savings!
It also allows you to come to our club Weekend Retreat held in November - this is open to members only.
For more information email: palmyfolkclub@gmail.com